Many of you may have noticed that WheelchairScope has not been livestreaming as much lately. This is partly due to other paid work I have going on but more importantly in the UK, as winter draws in, there are less outdoor activities going on and the gloomy light does not make livestreaming very good. Who wants to see a dull gloomy park in the UK?

Well, now Hype may be the answer. Like other livestreaming apps, you can broadcast live to the world from wherever you are, but in addition you can introduce photos, music, prerecorded videos that you already have on your iPhone or iPad at any time during your broadcast. So whether it’s raining or snowing outside, you can still live broadcast from inside and feature some stuff you’ve already recorded previously and still be able to interact with your viewers. My favourite thing is that you can make your viewers’ comments pop up on the screen and then move them around. It makes the audience feel more engaged and makes your content appear more FUN and spontaneous. 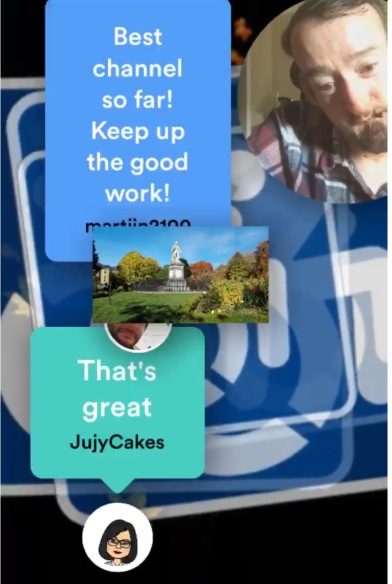 You can have multiple videos and pictures on the screen at the same time and it really reminds me of when MTV began in the 1980s and everything was very immediate and lots of stuff was going on behind and in front of the presenter.

It may all sound incredibly complicated but it’s not and at least for now, we’re all learning together. I only did my 2nd hype today and Rus, one of the founders of the app joined my broadcast and helped me keep on track. It probably pays to be a little more prepared before you start the broadcast so you don’t get too carried away with all the bells and whistles.

I think I will be using it in to produce shows where I can share fun little videos related to the Disability world. For instance, I am already working on a ‘ramp of the week’ feature where I will show my wheelchair speeding down ramps from across the world (Trust me, it will be a good idea). I also hope fans of WheelchairScope will join in by tweeting me photos they would like to appear on the show.

WheelchairScope is all about giving people confidence to share experiences and show their viewpoint of the word, regardless of what type of impairment they may have. I hope by using Hype we can extend that idea further.